Speech for the opening of the exhibition "Mysterium" at Gellert-Museum Hainichen in May 18th. 2008

Paintings and Etchings from twelve years

Even if, by the omnipresence of pictures in the today's media age, her magic character has fallen into oblivion extensively, picture and cult were not to be separated at first of each other. One of the interpretations of the animal paintings in the caves of Lascaux says that before symbolically in the effigy the hunting magic was committed to shoot the prey really in the connection successfully. Still today it can happen in special cases travellers in distant and remote regions that people avoid to be to become photographed because they believe, with the picture the foreign influence on the illustrated attains. And we know everybody stories of scraped out eyes on the photos of the past lovers, stories of pictures in which on behalf actions were committed which are valid, actually, for the shown.

Thus effigy and model, reality and secret stand in a connection which concretises itself in the picture work. Something mystic, only privy accessible stuck since prehistoric time to the pictures, all the same whether we are aware even today of that or not. There are religions with a strict picture ban - like the Judaism and Islam - and other with distinctive picture cult, like Hinduism, Buddhism and Christianity. Her relation to the picture is uninterested apparently none of the religions. The in terms of percentage high portion of Jewish abstract artists has led to art-historical speculations about the role of the Jewish picture ban with the formation of the abstraction about 1910. In provided that the modern media societies are also picture societies, even if secularized. All the same whether iconolatry or picture abstinence - more than the music around which there never were comparable disputes surrounds the painting a mystery which reveals not least itself today about the price of a piece of art or closes. This everything - or this everything just - did not have in mind Jürgen Höritzsch maybe when he called his new exhibition Mystery. 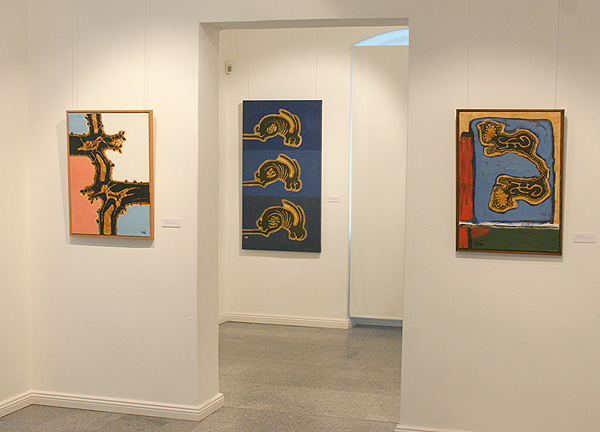 View in the exhibition: "Balzwerk", "Drei Hasen Blau" (Three Hares Blue) and "Die Andere" (The Other One)
© Heinz Hammer

The exposition shows pictures of the last twelve years. If the striking communication of deliberate contents never was his thing, it hardly surprises that Jürgen Höritzsch has also worked this time with allusions and paradoxes: with only apparently realistic reproductions of people and objects whose connection we cannot really understand, and making unfamiliar structures and textures which turn out as a real subject of his art. Incredibly, inconceivably, incomprehensibly a lot is in these pictures. Exactly in it friends and experts of his art find the friend.

The oldest composition of the exhibition is the painting "of The round dances" from 1996. What are for foetuses and skeletons which have lined up there for the dance? Like prototypes of the life they remind of early development stages of different animals, and as in a symbol of the Phylogenese seems to develop one from the other. Such surreal scenes remind formally still of solutions of the artist from the 1980s. Indeed, Jürgen Höritzsch does not paint his subjects any more directly on the canvas, but first on half-clear paper for more than 10 years. There he covers bright places with Gummi arabicum and covers the whole surface afterwards with Indian ink, before under a sharp jet of water the darkness is blown off by the surfaces which should remain bright again. The so won conversions of his motives collagiert of the artists on the canvases which he processs further then with acrylic colour. Typically for this mixing technology which Jürgen Höritzsch Laminage-Malerei calls the strange coexistence is in his topical creating stylistically of different form groups.

An extreme portrait format on luminous-coloured reason is called "three hares blue". On three differently blue colour fields three nearly same animals whom the picture title us names are placed. Their stylised embryo form works absurdly by the length of the hind legs. With the reduction on a basic form which allows to think of not yet completely developed the artist appeals to a more general, also more fundamental level. The ameba-like creatures of early pictures work till this composition from 2002 in. At the same time the monochrome, very making unfamiliar picture reason is an invention of newer date. Dürer, Beuys and Horst Antes have introduced the hare in Mount Olympus of the art; also Jürgen Höritzsch has quite often used the motive. However, completely regardless of some painting artist's colleagues external-artistic interpretations to him are uninterested. The hare is for him no symbol, but simply as he himself calls it, "popular figure". Therefore, the odd painting "disaster" also shows the respect between person and hare not as a crass aggression, but subtly as on a Domestizierung being based ones.

There are many motives which covers itself - partly openly, partly - over and over again move by the works of this artist. They are taken up again, "fortified" and put in a new connection what allows to sway the viewer between recognising and irritation. Moreover, these experienced motives can find in quite different formats and technologies use: in the paintings just as in the pressure graphics, on big canvases and small papers. Currently and still up to the 8th of June the town museum in Leipzig in the old city hall shows the exposition "Richard Wagner Episode X" in which Jürgen Höritzsch with a series is represented by nine compact, square pictures. 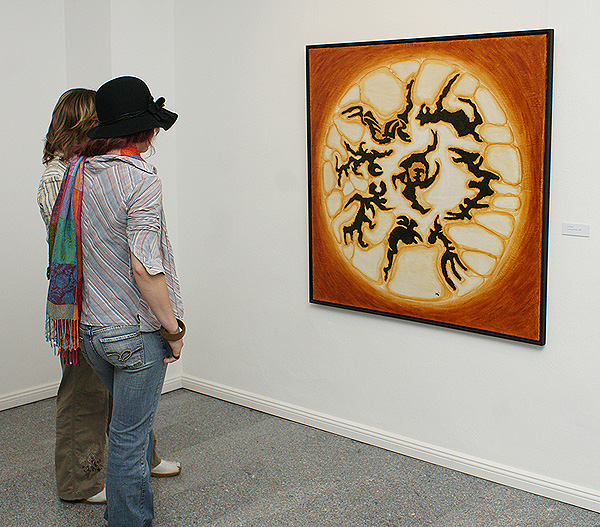 Visitors of the exhibition in front of the painting: "Der Reigen" (Round Dance)
© Heinz Hammer

Jürgen Höritzsch is not only a painter, but also a prominent graphic artist. Just today where freedom and enforced novelty degrade craft skill to the secondary virtue in the art, perfect pressure graphics are hand almost already a rarity. Probably, however, the creative potential of an artist nowhere is clearer than in entire, compelling besides uncostly symbiosis of art and Handwerklichkeit. Already since decades Jürgen Höritzsch experiments in the area of the pressure graphics, especially of the etching, with intellectual curiosity.

He use unusual and self-provided recipes and use differently compound Abdecklacke, those which completely seal the metal plate and permit homogeneous grey surfaces, or completely gets thin which are friable, form with the dry in the sun an octopus's lee and themselves after him corrode as a fine Lineament knock down. Moreover, he corrodes records several times and passed away long, so that a whole gradation of grey values up to the deepest black arises. In combination with reserve procedure and soft reason etchings the artist carries out a new technology since 2005, finally. While he uses photosensitive copy varnish for covering of the metal plates as he is used conventionally in the electronics to the production by leading records, he can cite known or half-known picture icons like in his paintings so now also in the etching. Exposes and develops like a photo, the copy varnish is injured only at the black places and remains in the bright parts untouched. Thereby becomes in next ätzbad the etching record furrowed where the varnish is destroyed. In the so resulted joints kannsich the printing-ink work to be transferred under the pressure of the press on the paper.

Actually, it is idle to want to describe the whole Procedere. Since Jürgen Höritzsch combines the different low-pressure procedures and invents always new variations there. This artist enjoys the contact with the material of his art. His etchings represent a complicated work process of astonishing sovereignty. At the same time Jürgen Höritzsch uses this technology so of course, yes, playfully that, in the end, for the viewer questions of the production not only not understandably, but also have become second-rate - I refer here especially to the sheet "Garden of the Trinity" from 2007, that work which also adorns the invitation for the exhibition in the Gellert museum of Hainichen.

Rightly Jürgen Höritzsch enjoys the call of a stated rubber, nevertheless, he puts out all the stops of the technology and experiments not only during the treatment of the record, but also still during the pressure. The fact that he procures this itself, gets on (especially in view of the colour graphics) by itself. Thus this artist develops his expression means which make visible more and more than only one motive from the interplay between artistic concept and technical variation, planning and play.

Only shortly before the exhibition opening Jürgen Höritzsch has finished the original-graphic book "Trance" with texts of the literary expressionism (Albert Ehrenstein, Franz Werfel, Gottfried Benn, Georg TrakI, Berta Lask, Ruth Schaumann and Georg Heym) and 9 etchings. How texts and pictures, inner book and book cover form a whole, well over the quality of his individual parts hinausweist, is wonderful. Framed on the wall and whipped in the glass cabinet you meet this work and can convince yourselves of the mental density and artistic association strength.

Jürgen Höritzsch who is a firm size in the art life of the city of Chemnitz and our region works in a studio in the industrial monument active mechanical engineering Schubert and Salzer. There originate his paintings, but also the pressure graphics for whose duplication an etching press exists. The fact that the Gellertmuseum Hainichen opens today, by the international museum day, a show of this artist, the esteem which he enjoys points. With 8 paintings and 18 graphics as well as the original-graphic book this museum exhibition whose Hängung of the artists procured, by the way, itself offers a good insight into his oeuvre and at the same time suggestions and impulses after the day. I wish you intensive and stimulating art meetings. I wish the exhibition like the in parallel shown park pieces of furniture of Volker Beyer - the proper attention!